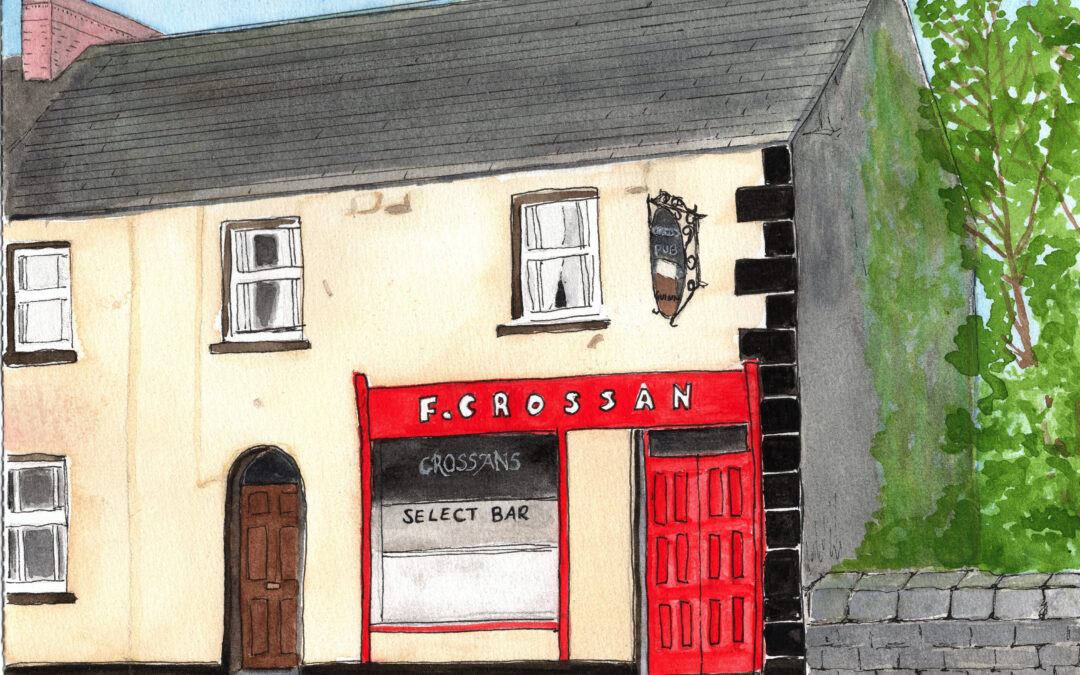 Crosson’s pub, at the bottom of Bailieborough town, has a delightfully understated traditional shop front.  It drew me and made me wonder what stories it might have to tell.  I started to paint it and Eugene Markey posted one of the memories that came to his mind.

“I remember going into Crossan’s pub….not for a drink, but to pay my motorcycle insurance to the late lady of the house, Pearl. She was a lovely lady and the pub just sparkled, the wooden floors, bar and stools were scrubbed white. It was a beautiful place to visit.   It is at least 42 years since I was in there, I also wonder where my motorcycle a Honda H100 registered 133 AID ever ended up!.  I bought it new in Conaty’s of Cavan, ah the memories.”

What a beautiful mental image of the late lady of the house, Pearl, and the sparkling interior.  It did surprise me that you could go to a pub in those days to pay your motorcycle insurance! Imagine!

As someone who has made Bailieborough her home in more recent years, I love finding little gems from it’s history, and hearing the stories told by local of the town and surrounding countryside.

While trying to find out more about the history behind the buildings in the town I came across this wonderful record of local forges which was Collected as part of the Schools’ Folklore scheme, 1937-1938, under the supervision of teacher A. Ó Dubhda from the Model School. 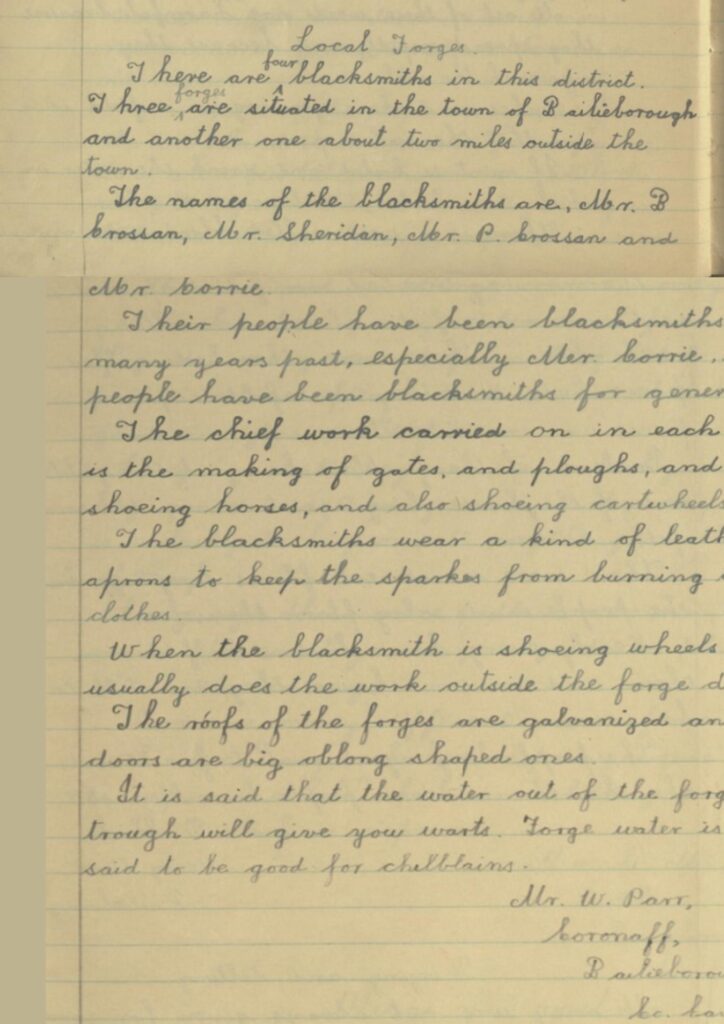 “There are four blacksmiths in this district.

Three forges are situated in the town of Bailieborough and another one about two miles outside the town.

The names of the blacksmiths are, Mr. B Crossan, Mr. Sheridan, Mr. P. Crossan and Mr. Corrie.

The chief work carried on in each forge is the making of gates, and ploughs, and shoeing horses, and also shoeing cartwheels.

The blacksmiths wear a kind of leathern aprons to keep the sparks from burning their clothes.

When the blacksmith is shoeing wheels he usually does the work outside the forge door.

The roofs of the forges are galvanized and the doors are big oblong shaped ones.

It is said that the water out of the forge trough will give you warts. Forge water is also said to be good for chilblains.”

So, the Crosson brothers both had forges.  I would love to know where these forges were, I assume, perhaps incorrectly that one of the forges was on or near the site of Crosson’s Pub.  Can anyone cast some light on the forges and their locations?

This website uses cookies to improve your experience while you navigate through the website. Out of these cookies, the cookies that are categorized as necessary are stored on your browser as they are essential for the working of basic functionalities of the website. We also use third-party cookies that help us analyze and understand how you use this website. These cookies will be stored in your browser only with your consent. You also have the option to opt-out of these cookies. But opting out of some of these cookies may have an effect on your browsing experience.
Necessary Always Enabled
Necessary cookies are absolutely essential for the website to function properly. This category only includes cookies that ensures basic functionalities and security features of the website. These cookies do not store any personal information.
Non-necessary
Any cookies that may not be particularly necessary for the website to function and is used specifically to collect user personal data via analytics, ads, other embedded contents are termed as non-necessary cookies. It is mandatory to procure user consent prior to running these cookies on your website.
SAVE & ACCEPT